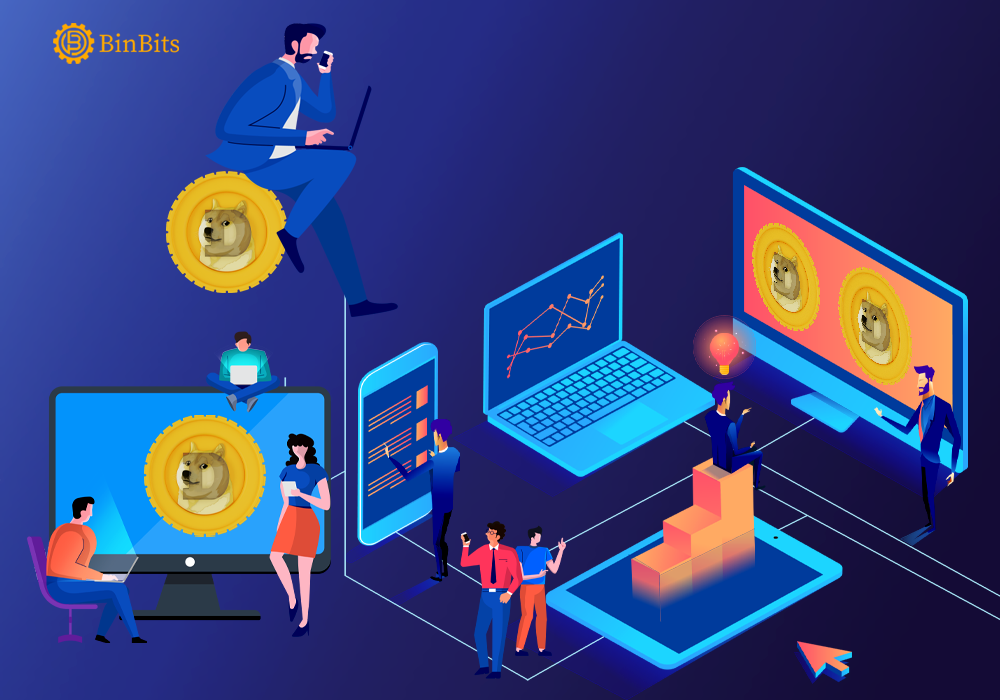 Dogecoin (DOGE) is a peer-to-peer, open-source cryptocurrency that started off as a mere joke in 2013. It belongs to the category of altcoins — a collective name used to describe any alternative digital asset, that isn’t Bitcoin.

But while Dogecoin was launched in a not-so-serious manner, it has since gone on to gain a very large following. Although, its large following may be linked to the jokeful nature of its launch, its blockchain should also take some credit.

Additionally however, there are some peculiar features that also make Dogecoin to standout. These include it’s low price and unlimited supply.

As earlier mentioned in this article, Dogecoin came into existence in 2013. That was when Jackson Palmer, a product manager at the Sydney office of Adobe Inc., thought of it and created it as a way to kind of ridicule the buzz around cryptocurrencies at the time. However, on seeing the positive feedbacks that Dogecoin began to generate from social media users, Palmer decided to buy the domain dogecoin.com.

Interestingly, around the time Palmer decided to buy the domain name, software developer Billy Markus was away in Portland, Oregon. Markus was having problems trying to create his own digital currency and getting it the much needed publicity at the time. Soon after, Markus came to learn about the Dogecoin craze and reached out to Palmer. And so, he became the software developer behind an actual Dogecoin.

Meanwhile, the ‘fun’ coin was built to use Litecoin’s scrypt technology and is also a Proof-of-Work (PoW) coin.

Eventually, both Palmer and Markus launched the coin on December 6, 2013. And barely 2 weeks later, its value had surged by up to 300%.

Controversy Hit Dogecoin After Establishing Itself

In all honesty, the rise of Dogecoin may be attributed to its casual outlook and its generosity. While its Shiba Inu (Japanese dog) logo is a plus, Dogecoin’s casual presentation was in direct consonance with what the growing crypto community was looking for. Additionally, its unlimited supply and scrypt technology also gave it a more consumer-friendly outlook than Bitcoin.

And by December 2014 when Dogecoin clocked a year, it was already boasting of a market capitalization of $20 million and a stable fanbase.﻿

Meanwhile, 2015 became a year of scandals and controversies for the coin. The controversial times began with Jackson Palmer leaving. Although, he claimed his departure was based on the fact that a “toxic community” had grown up around the coin and the money it was producing.

Just like every other cryptocurrency, Dogecoin’s value surged uncontrollably during the bubble of 2017. But by 2018, it also fell alongside the rest of the crypto universe. However, within that period, the cryptocurrency did well to surpass a $1 billion market capitalization for the first time ever.

In the summer of 2019, Dogecoin also saw another huge rise in value along with the rest of the crypto market. That year, major crypto exchange Binance listed the coin, and the popular suggestive tweet by Tesla CEO Elon Musk also seemed to have endorsed the coin.

But by May 2021, Musk’s open support of Dogecoin in 2021 was indicated in his tweet about working hand-in-hand with the developers of the coin. In fact, in early 2022, Musk also ran a poll seeking public opinion on whether or not Tesla should accept Dogecoin as a form of payment.

Meanwhile, more use cases also came for the coin in October 2021. That was when Cinema chain AMC Entertainment Holdings, Inc. announced that it would start accepting the meme-based cryptocurrency. A major development if we would say.

Interestingly, its very likely that anyone on this page is not here by mere chance. You are probably looking to explore the cryptocurrency and its uses. And, you’re in luck! Because the rest of this article will be answering some of the questions you probably still have.

How can I buy Dogecoin?

Purchasing Dogecoin is simple. All you need to do is register an account with any of the many cryptocurrency exchanges we have. That is of course, if you don’t already have one. Meanwhile, it might do you well to use some of the giant exchanges like Binance, Coinbase, and Kraken. They all support Dogecoin.

Where can I spend my Dogecoin?

Surely, when one holds an asset such as Dogecoin, you want to be sure you can spend it when you want to. And there are many businesses out there that accept DOGE, most notably Elon Musk’s SpaceX and the Dallas Mavericks. But even away from that, the exchanges can swap for you and help convert to other assets or fiat as you so wish. Also, many Dogecoin holders use their DOGE for tipping on social media platforms.

All of these developments undoubtedly goes to show how far Dogecoin has come over the years. In fact, by October 8, 2021, Dogecoin had already broken into the top 10 cryptocurrency rankings by market capitalization. At that time, its position on the rankings log was 10th, with a market capitalization of $31.9 billion. This was definitely an impressive upsurge however. Recall that, just a year before, Dogecoin’s position was 48th with a market cap of $339 million.