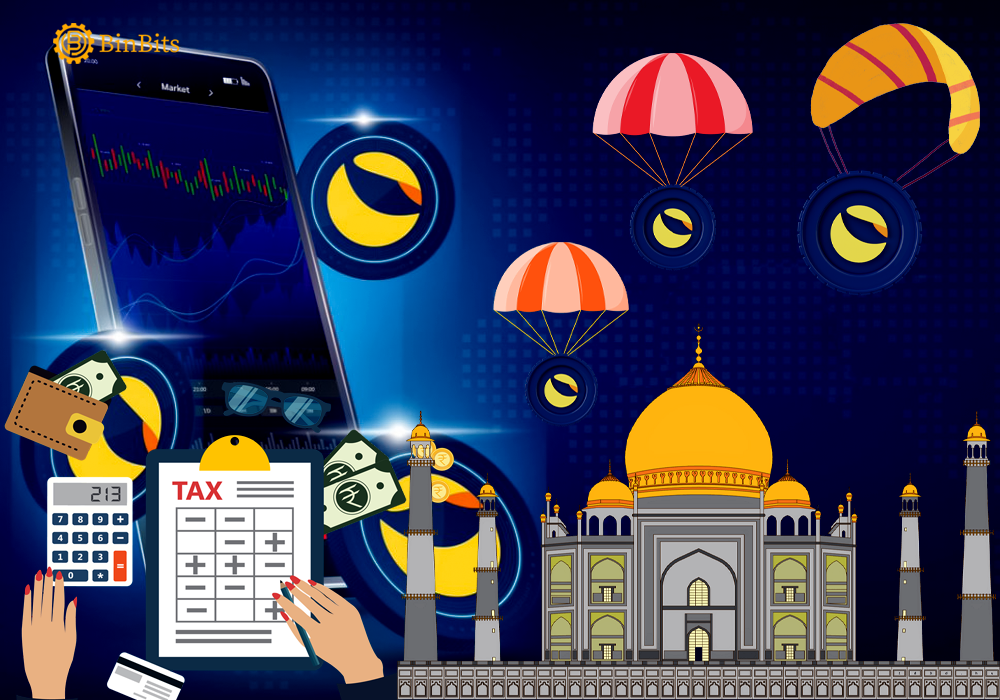 Tax Law and how it is affecting LUNA Airdrop in India

The crash and rebirth of Luna are one of the most pressing issues in the crypto industry lately. Upon the resuscitation of the token, various exchange platforms have pledged support to aid the airdrop for holders of the previous token. Though, not complementary enough compared to what they lost on the defunct LUNA, but a fair compensation for their endurance. So far, numerous investors have bemoaned the ratio of tokens they got from the airdrop. The Luna Airdrop in India has been a different story entirely, as the existing Tax law is posing a mountain for investors.

Unlike investors from countries, Holders of the old LUNA token are not only complaining about the unfair ratio. Instead, they have a stumbling block in form of the tax law to recover a substantial part of their investment. Backing the combatant ratio of distributing the new token, Indian tax law has inflicted severe damage on LUNA investors.

While the airdrop has been a relieving intervention for investors, it further uncovers the unfair nature of the tax law. It uncovers the nonchalant attitude of the Finance Minister towards the financial healthiness of crypto investors in India. It reveals how the law tends to enrich the pocket of the government without caring about investors.

Since April 2022, earnings from the trading of digital possession or cryptocurrency are taxable at 30%. This implies that earnings will be taxed even though taxpayers’ total income is below the threshold limit of Rs 2.50 lakh. Additionally, Investors are not permitted to set off losses incurred on cryptocurrency. Alongside 1% TDS on crypto trading that’ll come into play by July are combating the growth of crypto in India.

Background to the airdrop

Also, this growth is under threat with the introduction of GST on the total value of crypto trades. However, the implication of the tax law in India isn’t the subject of discussion today. Notably, the Luna airdrop has been a nightmare due to tax law, but how does this come into effect?

Firstly, understanding the negative relationship between tax law and Luna Airdrop requires a background to the airdrop itself. Last May, both LUNA(Defunct) and algorithmic Stablecoin, UST encountered a tremendous turn of fortune. The UST lost its peg against the Dollar resulting in a massive price fall, this decline also affected LUNA. This resulted in the massive delisting of the two tokens from notable Crypto exchange platforms. After several consultations within the Luna community and other concerned stakeholders, LUNA 2.0 came to life.

Subsequently, the Terra Foundation alongside the CEO of the group, Do Kwon agreed to Airdrop the new token for holders of the previous coin. Ideally, it tends to serve as a complement to the sizable Investment they lost due to the crisis. The first big blow landed on investors when the team disclosed that they won’t get all their Investment in full return. Instead, it will be distributed in ratios with preferential treatment for minor holders.

Additionally, to support the move, leading crypto trading platforms pledged their support to aid the airdrop. After the airdrop, holders bemoaned that despite the initial shortfalls towards recovering their funds, the airdrop didn’t reflect the agreed ratio. Meanwhile, Luna Investors in India are likely to record more shortages as a result.

How does the tax Law is affecting LUNA Airdrop in India

Due to the tax law, beneficiaries of the LUNA airdrop in India are likely to pay up to 30% of the token they receive. This covers returns from cryptocurrency, NFT even mining rewards, nevertheless, the law didn’t directly include airdrops. It’s important to note that the tax law comes in two dimensions. First, receiving cryptocurrency in India directly attracts a 30% rate base on the current value of the token. Second, if the tokens are sold, it will incur a 30% tax base on incremental income.

Lastly, if India’s beneficiaries of the Luna airdrop dodge the payment of tax on the airdrop. It won’t last a long time or sufficiently cover what they lost if they sell their holdings. The other side of the tax law will compel them and forcefully scoop the best part of the airdrop. Technically, the idea of recovering a substantial part of their lost investment on the defunct LUNA is a fairytale for India Investors.