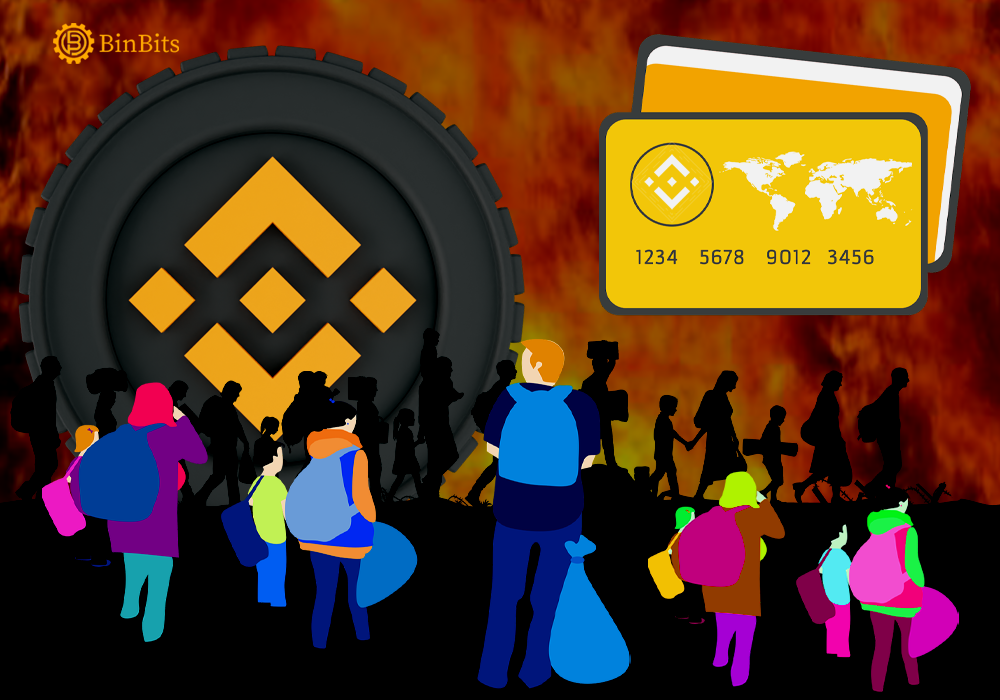 A leading crypto exchange platform, identified as Binance recently launched a crypto card that enables Ukrainian refugees to create crypto transactions. The exchange made the announcement in a blog release conveyed on it’s official website today. This project, however allow the refugees to send and receive fund via the Binance Visa Card.

According to reports, the exchange platform grossly partnered with different corporations including European banking as a service platform Contis. The exchange also collaborated with non-profit organizations entail Rotary and Palianytsia.

As reported, the collaboration manifested as a robust effort to aid Ukrainian refugees left stranded and handicapped in the ongoing crises occasioned by the Russian invasion of their soil. The project overtly devises a way for them to send and receive funds without any complications. In addition, the architecture of the card enables them to make purchases within the European Economic Area (EEA).

More so, Ukrainian refugees who possess the cards and have been validated by their respective local non-profit organizations tend to enjoy monetary support from Binance. This support, however, comes in form of Binance USD(BUSD). As announced, these Ukrainian refugees will receive 75BUSD every month for three months. The 75BUSD emerges as the standard donation amount as recommended by United Nations High Commissioner for Refugees(UNHCR).

Binance head of Charity, Helen Hai revealed to a local media that the card is not for commercial products. According to her, its emergence manifests to create an available payment method to receive and spend donations. Helen describes this as a significant way by which the world can see the role of crypto in society.

The head of Charity maintained that the world knows the importance of cryptocurrency in conflicts and how the trend transforms reality. She further that cryptocurrency plays a crucial role in raising necessary funds and providing much-desired humanitarian assistance to Ukrainian refugees.

Additionally, Hai asserted that this development indicates that crypto further serves as an avenue for payment, rather than trades alone. She reckoned crypto as a tool with no limitations and constraints which requires no documents and other difficult or lengthy bureaucratic techniques. The head of charity further boasted that the trend possesses the capacity to produce immediate efficient results.

Recall that Vitalik Buterin grossly donated about $5million worth of Ether(ETH) to Ukrainian refugees in early April. However, the Ethereum founder failed to publish any public statements about the details of the collected donations. Details of the donation, however, became public two days later on social media after detection.