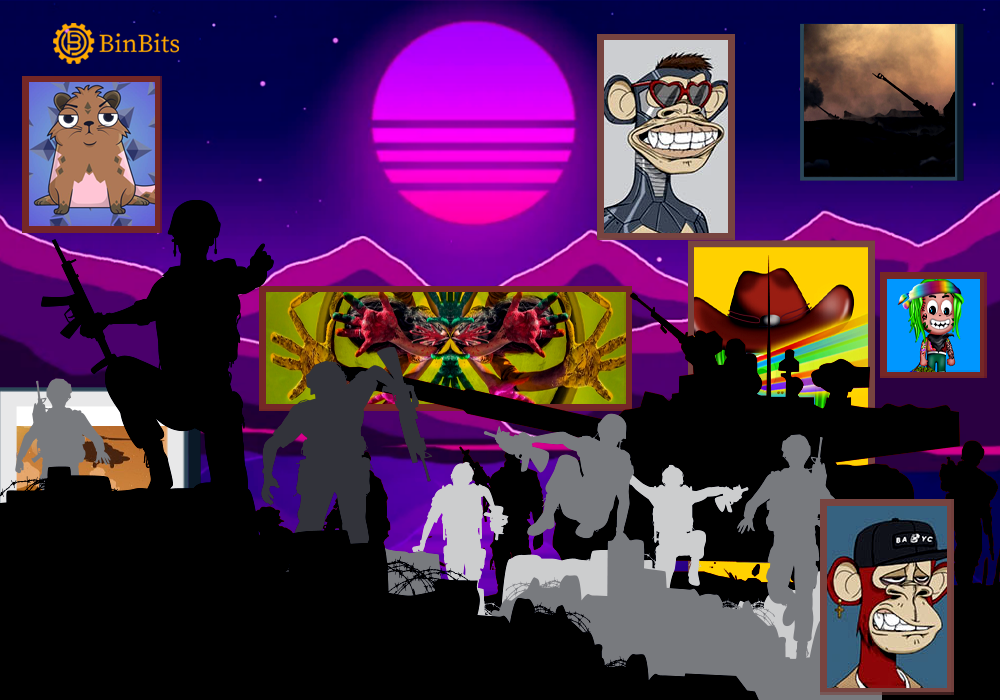 The invasion of Ukraine by Russia has been considered the strongest military operation in Europe since World War II. It is the world’s first crypto war because both governments are taking advantage of crypto.

Donations of cryptocurrency to Ukraine As funds pour in from Bitcoin, Ether, PolkaDot, and NFTs, the total amount raised reaches $52 million. While analysts argue that Russia may use cryptocurrency to circumvent sanctions and the international banking system, Ukraine has used digital currencies to raise emergency finances.

For the past few days, the Ukraine Russia Conflict has been trending on social media, despite countless humanitarian efforts announced by countries. Particularly, the crypto community has been a vital part of the attempts to assist Ukraine amid all this confusion and information overload.

1. NFTs for the greater good in Ukraine Russia War

Many NFT platforms have managed to collect the works of many Ukrainian artists and are actively pushing sales. Furthermore, the Ukrainian NFT industry has a list of all Ukrainian NFT artists. They have also had their works and links ready to purchase. The majority of them comprise links to popular NFT platforms such as OpenSea, Foundation, and others.

Most crypto companies choose to co-operate after the US introduced a policy requiring some to comply with its request to restrict transactions from Russian addresses: if the sanctions were extended to individual persons, they would comply.

This action has ignited a firestorm of debate in the crypto community: if crypto companies are compelled to “politically” stand in line and freeze their users’ accounts, what will happen next?

Countries such as Ukraine, on the other hand, have called on crypto businesses to take sides, urging them to block Russian customers’ accounts to prevent Russia from utilizing crypto assets to avoid sanctions. DMarket, a native Ukrainian gaming NFT trading platform will suspend the accounts of Russian and Belarusian players. It will be preventing them from withdrawing their funds.

3. Cryptocurrency Has the Potential to Avoid Sanctions and Provide Relief

In response to Russia’s actions, the United States and other countries have put economic sanctions on the country. These sanctions prohibit some businesses and persons from transacting with one another, and those who do so are liable to penalties.

However, there is no central authority in bitcoin that can monitor or prevent transactions. As a result, Russian entities seeking to evade sanctions might utilize Bitcoin and other cryptocurrencies to send money anonymously. According to the New York Times, Iran and North Korea have similar tactics.

The restrictions might potentially apply to cryptocurrency exchanges and businesses operating in the country. However, such regulations would be unable to regulate crypto payments between non-exchange wallets.

Internet connection restrictions might also limit cryptocurrency transactions, whether they take place inside or outside of exchanges. Some parts of Ukraine have already lost internet service, while others fear a complete blackout.

5. Crypto Trends & Projects are Overlooked due to Ukraine Russia War

Indirectly, there are also concerns that Russia may impose a cryptocurrency ban or extensive restrictions. Such steps would almost certainly pave the path for a future rouble-backing central bank digital currency (CBDC).

However, it appears that such limits will not come into place, as they involve Russia’s central bank rather than the government.

Meanwhile, Ukraine is recently starting to support cryptocurrency in the country. Ukraine enacted a bill on Feb. 18 safeguarding enterprises from bitcoin fraud and misuse, although it still does not consider cryptocurrencies legal tender. Such favourable events may pave the path for further crypto acceptance.

What will the crypto market look like in the future?

When the sovereign state is under threat, the fiat currency on sovereign credit becomes inescapable. Additionally, the super-sovereign hard money becomes a lifeline. In the past, it seems that there was only gold, but now there is another alternative. The Russian-Ukrainian conflict has entirely erased encrypted assets from the equation, and more people will invest in the future, accelerating the encryption industry’s overall development.

To be honest, encrypted assets continue to play a supporting and secondary role in the Russia-Ukraine conflict, with the regular financial market remaining the dominating player.