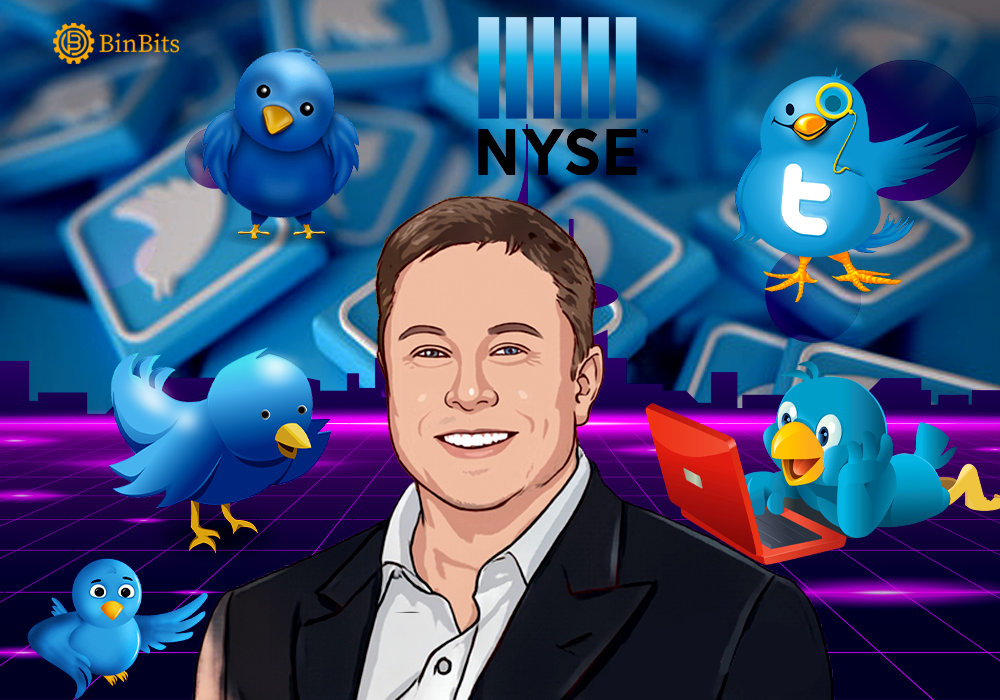 The New York Stock Exchange has delisted Twitter, the NYSE website notes on Friday. The development comes as a result of the final completion of the Takeover deal of Twitter by Tesla CEO, Elon Musk.

The report brings an end to the Nine Years listing of the firm on NYSE. Twitter will no longer be a public organization since the firm became listed on the NYSE in 2013. Consequently, other trading outlets that are close to the cryptocurrency space have dedicated Twitter shares. These firms include Robinhood and eToro.

What the development implies for Elon Musk and Twitter

Additionally, since Twitter has gone private, Elon Musk will have the privilege to make certain regulatory decisions. It will as well save Twitter and Elon Musk from coming under the watchful eyes of regulators all the time. Therefore, Elon Musk will avoid any future rows with the United States Securities and Exchange Commission. Similarly, Twitter won’t have to worry about the financial public scrutiny that follows Public Organizations. Now, the firm won’t be mandated to make quarterly publications of it’s financial status.

For a jovial personality like the Tesla boss, fines that come about from speaking publicly on certain things relating to the administration of Public Companies have been banished. Recall that Elon Musk attracted a fine of about $40 million due to his comments on making Tesla Private.

However, the acquisition of Twitter finally put an end to the dragging controversies between Elon Musk and Twitter board. Before the deal became finalized yesterday, a series of lawsuits and accusations emanated. These lawsuits evolve around Elon Musk’s attempt to blackout from the deal. In his defense, the Tech Mogul faulted the misrepresentation of the number of spam bots on the micro-blogging app.

If the Tesla boss had not completed the deal, there could have been a resumption of the lawsuit that sought to force him to finalize the deal. Recall that a court ruling set a deadline of October 28 for Elon Musk to complete the deal.

Now, the deal has been completed at $54.2 per share, suming it to about $44 billion. Notably, the deal has some contributing partners that assisted Elon Musk to acquire Twitter. Among the partners is the World biggest cryptocurrency exchange by trading volume, Binance. According to reports, Binance contributed $500 million to the deal, making the cryptocurrency exchange the fourth-largest donor to the deal.