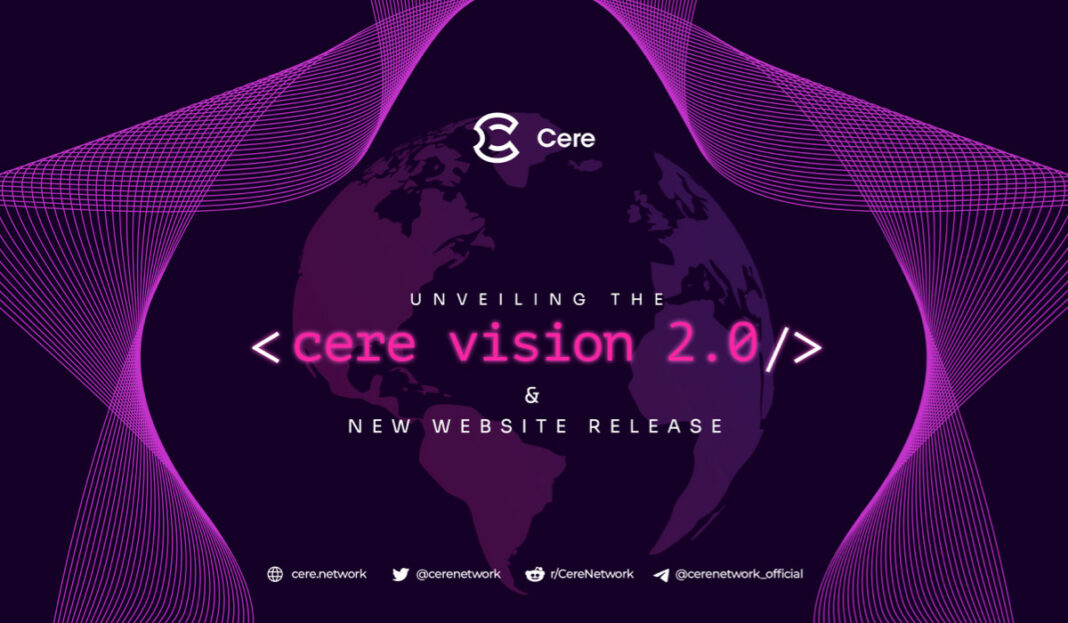 Cere Network unveils Vision 2.0 primed to be a key driver of Web3 infrastructure adoption in 2023

Cere Network, a leader in Decentralized Data Cloud (DDC) platforms, announced today the launch of Vision 2.0 to update supporters on its mission for truly decentralized Web3. The Vision 2.0 release follows the launch of Cere Network’s new website, which displays an array of exciting technology updates along with partnerships and applications in the pipeline.

Vision 2.0 provides a critical look at dApps and their data infrastructure. Despite what some may think, most of today’s dApps are not decentralized, particularly their data — which is usually stored on centralized servers. This severely limits the decentralized and serverless potential of dApps and does not resolve the privacy and security issues plaguing the current Web2 centralized apps that host key user identity and data in compromising states.

“DApps and Web3, in general, cannot progress into a truly open and secure future without a truly decentralized data protocol,” said Fred Jin, Founder, and CEO of Cere. “App data continues to be stored on centralized servers. We are looking to change that.”

Cere’s Decentralized Data Network and protocol, along with the Cere Tools & Services Suite, allow any application to efficiently serve and store data on its Decentralized Data Cloud (DDC), individually encrypted and segmented for each consumer. This world-changing data strategy and ethos will enable any consumer to truly own their data and make it interoperable across all apps and cloud data services. DDC is ready to power future use cases such as in medicine, where patients not only can access all of their medical records from their pocket but can also instantly permit any doctor/clinic or predictive analysis machine to access it; or in education, where learners/parents/educators can access all of their key learning paths/insights and facilitate hyper-personalized learning for each learner. Cere has already pioneered a universal wallet to bridge user data assets and access rights between applications.

Currently, most dApps primarily function as wallets interacting with smart contracts on blockchains, yet still relying on centralized data and infrastructure. Cere DDC provides the first viable alternative to this status quo for the benefit of both consumers and businesses. Cere is already working with partners and developers to read several applications in verticals such as digital media, gaming, and consumer brands.

“Our goal is to facilitate the development of new serverless and trustless applications and the refinement of Web3 applications,” said Jin. “Bringing DaaS to Web2 applications that already have large user bases is key to the mass adoption of decentralized utilities.”

Cere Network is the first Decentralized Data Cloud (DDC) platform that supports plug-and-play integration with any EVM-compatible blockchain, such as Ethereum, Polygon, BSC, Solana, Polkadot, Cosmos, and others. The DDC streamlines storing and serving content and data directly to user wallets and even to the owners of permissioned NFTs. DDC also comes with important tools such as Cere Freeport, which significantly simplifies app development by enabling direct content streaming to NFT owners’ wallets. By introducing decentralized Data-as-a-Service (DaaS), data can be stored and served with higher degrees of decentralization, leading to improved reliability, security, censorship resistance and lower future costs. Applications can also become much more serverless in many use cases that DDC can support, freeing developers from the costs and headaches of infrastructure; in other words, not having to rely on big tech such as Amazon AWS, Apple, Alphabet, Microsoft, and Meta for key content and data services.

Upcoming Use Cases To Be Announced Soon

Many pending integrations with partners in media, gaming, and brands are coming out soon. Here’s a quick preview:

To learn more about Cere’s Vision 2.0, get started here.