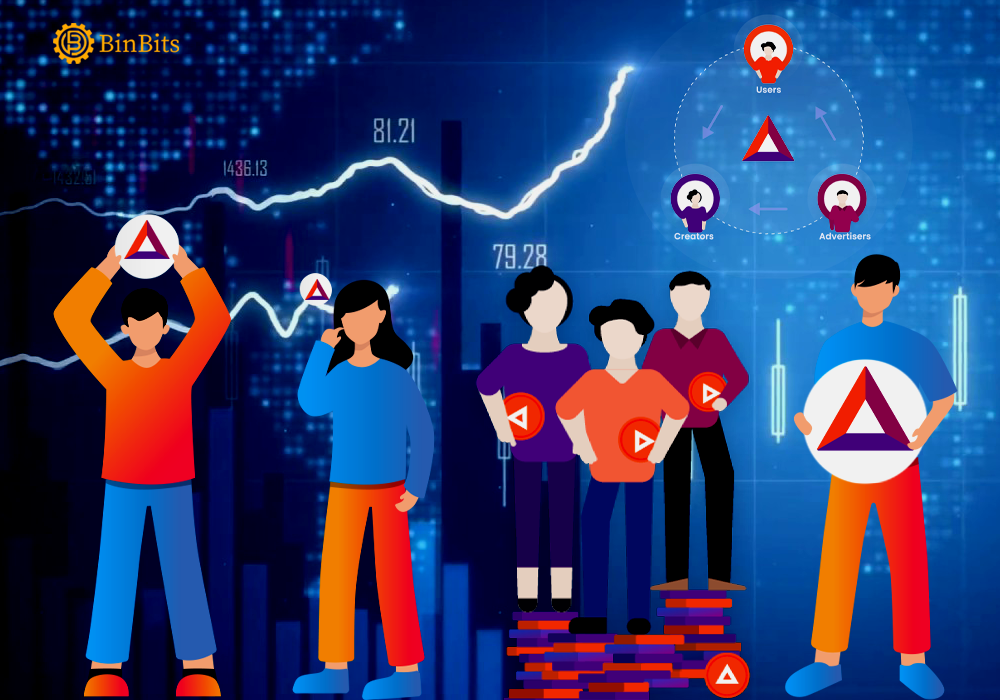 What is BAT coin?

BAT coin (Basic Attention Token) is a cryptocurrency that runs on the Ethereum blockchain. On the Brave platform, the utilization of BAT token as a method of payment for a variety of advertising services is available. Consequently helping users, advertisers, and publishers.

Attention has been widely recognized as a commodity, like wheat, pork bellies, or crude oil. Existing industries have long depended on it to drive sales. And
the new industries of the twentieth century turned it into a form of currency
they could mint. Beginning with radio, each new medium would attain its
commercial viability through the resale of what attention it could capture in
exchange for its ’free’ content.

Since its integration into Brave’s first global private ad platform, BAT coin has seen incredible growth. BAT coin has around 54 million monthly active users, 16 million daily active users, 1.4 million creators accepting BAT, thousands of ad campaigns with leading brands, and growing utility in the most innovative names in blockchain gaming. The BAT coin has become one of, if not the most, successful altcoin ventures to date as a result of the results.

How Does the BAT coin work?

BAT coin needs the Brave web browser for its usability by the BAT development team. Additionally, it’s built on Smart contracts, which allow marketers to transmit adverts to users in a lock state in exchange for a token payment. The user will receive a fraction of the token payment after seeing that ad.

Furthermore, the Brave browser receives some token money in the interim. The remaining token payment gets to the publisher who is hosting the advertisement.

BAT coin facilitates browsers for premium content, provider donations, and other data services. Following are some of the benefits such as:

What is Brave Browser?

The BAT coin team built the Brave browser, which is an open-source web browser. Also, the browser automatically disables annoying adverts and trackers. Primarily with a focus on privacy and performance. Even the most popular ad blockers for traditional browsers allow advertisers and trackers to follow your activities. Usually, Brave blocks all of them.

Accordingly, It upgrades all of the sites it can to use the HTTPS protocol, which adds an extra layer of protection to your browsing experience.

The Brave browser’s native token is BAT, which is an open-source, privacy browser that blocks trackers, invasive cookies, and malware. It makes use of blockchain technology to track user attention in an anonymous and secure manner, resulting in benefits for publishers.

Brave tracks a user’s attention, or their focus on mental interaction with digital material such as adverts. BAT’s creators claim that the user’s private data and tracking information is solely retaining the user’s device, assuring anonymity and privacy.

Also, users earn rewards with BAT of the Brave browser for their involvement in the project. BATs can be used to purchase a variety of services on the site, as well as premium content. Nonetheless, according to the BAT whitepaper, publishers will receive a larger part of ad revenue. 5 At this time, it’s unclear what will make up the Brave network’s premium content. Similarly, it’s unclear what platform-related services will be available or how the platform’s payment mechanism would work.

To release more coins into the ecosystem, several major cryptocurrencies use some kind of mining (proof-of-work) or staking (proof-of-stake). In this way, the Basic Attention Token is unique. There will be no more tokens in circulation after the user growth pool is depleted.

Where to store BAT coin?’

As an ERC20 token, BAT is compatible with ERC 20 wallets because it depends on Ethereum. Apart from that, MyEtherWallet is an excellent choice. Users can save it in the Brave browser’s wallet.

If customers want to keep their money in a hardware wallet, they should use the Ledger Nano S or Trezor hardware.

Let’s take a closer look at the Brave browser:

Brave is a free and open-source web browser that prioritizes privacy and speed. It monitors user behavior and removes adverts and trackers.

Furthermore, This browser has a background ledger system that keeps track of which sites and content the user spends the most time on, and the publishers get paid on that basis.

There are various advantages to using a bat coin:

The Bat Team is performing exceptionally well, and their creator has already created a successful browser that is widely used. So it’ll be interesting to watch how they manage to persuade customers to adopt Bat alongside their existing browsers.