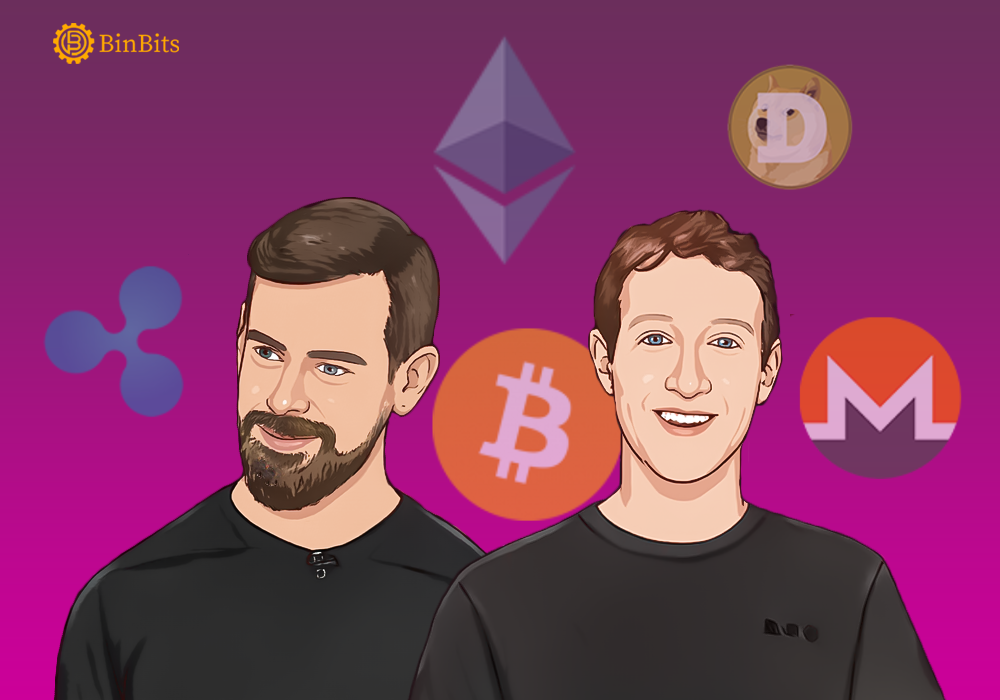 Jack Dorsey and Mark Zuckerberg Journey into Crypto so far

Jack Dorsey was famous for his exploits with Twitter, an interactive social platform he Co-founded in 2006. After recording a remarkable success with Twitter, Dorsey resigned last year to focus on numerous projects that are crypto-oriented. His decision to step down as the CEO of Twitter was to focus on Fintech firm Block, previously known as Square.

Additionally, Dorsey’s journey into cryptocurrency first began when started drumming support for Bitcoin in 2017. That same year Block’s cash app included an option that permits their customers to trade Bitcoin with their balance. The inclusion boosted the popularity of the app among users in the US, thus earning it a 60% surge in User’s rate.
Ever since he hasn’t stopped advocating for Bitcoin. Cash App is an app that supports money transfers between users.

Furthermore, Jack Dorsey is aggressively pushing for Bitcoin to become the internet’s currency. Last August, Square revealed a whitepaper of its decentralized Bitcoin trading proposal; tbDEX. At a time in 2018 when the cryptocurrency endured unrest, Dorsey was not bothered, believing that it would bounce back. He continued his quest into the industry when he founded the Btrust project (Bitcoin Trust) alongside popular rapper, Jay-Z. With the Btrust initiative, Dorsey aims to build the development of Bitcoin in Africa and India.

In 2020, Mark Zuckerberg’s Meta announced its intention to Launch Libra in 2022. Due to legal issues the company decided to change the name to Diem. Diem is a blockchain-supported stablecoin, Unlike another popular cryptocurrency. Libra isn’t decentralized, it has a backup plan in the Libra Association as a regulatory central bank.

By April 2020, Diem revealed a blueprint for a proposed inclusion of various cryptocurrency. The majority of the initiative was supported by different Fiats, with a proposal to Swiss-based regulators for trading approval. Later that year, the company took a U-turn away from the Swiss regulator. And turn to the US Treasury for permission to run as a money services business. Unfortunately, the initiative died a natural death after failing to convince partners and regulators of its plans.

How they are faring so far

Moreso, Jack Dorsey has benefited more from Square and its involvement with Bitcoin. He was worth over $11.8 billion when he stepped down as Twitter C.E.O. Up to 88% of his Net Worth was acquired through his 11% shares in Square, a payment platform and also the inventor of the Bitcoin-oriented transfer app, Cash app. Mark Zuckerberg has experienced a dip lately, his company Meta just posted a staggering loss of over $10.2 billion. Thus resulting in a loss of 26% of its value. Due to his stake of 13% in Meta, his worth fell by $30billion.

Twitter has experienced remarkable growth over the years, with over 397 million daily users in the world. Facebook on the other hand is relatively bigger than Twitter in regards to daily users. It has an average of 2.9 billion active users per day. At a time, the two apps are rivals due to the interactive social platform they offer. Mark Zuckerberg may be a bigger name in the tech world, and Twitter may be under the shadows of Facebook. But Jack Dorsey has proven that a visionary blueprint can take him out of the Shadows of Mark Zuckerberg, and it is.