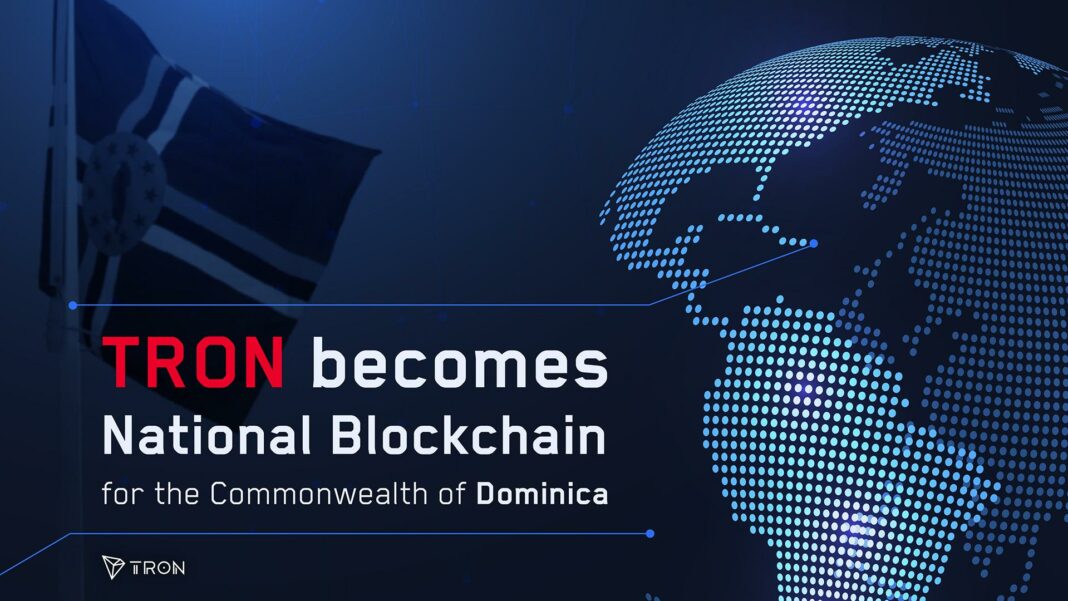 TRON, one of the leading public blockchains, partners with the Commonwealth of Dominica to develop and issue the Dominica Coin (DMC). The partnership represents a defining step forward by the Eastern Caribbean nation, who passed the Virtual Asset Business Act in Parliament earlier this year.

“This is a historic step for Dominica in its drive to enhance economic growth by embracing digital innovation and appointing TRON Protocol as its designated national blockchain infrastructure,” said Prime Minister of Dominica, Dr. Roosevelt Skerrit.

DMC is a blockchain-based fan token intended to raise awareness of Dominica’s natural heritage as well as to help promote its tourist attractions on a worldwide scale. Its creation marks a milestone in Dominica’s journey toward the future their Prime Minister envisioned, one that includes strong infrastructure, a more diversified agricultural footprint, and innovative developments to welcome entrepreneurial imagination. Traditionally a tourism paradise, their new vision endeavors to welcome more than just visitors to their region of the Caribbean.  “The open and cost-effective nature of the TRON blockchain infrastructure will play a vital role to better integrate Small Island Developing States like Dominica into the global economy in the future,” Prime Minister Roosevelt Skerrit affirmed.

As the Permanent Representative of Grenada to the World Trade Organization and Founder of TRON, H.E. Justin Sun is advancing the development of e-commerce and blockchain technology in the Caribbean regions, in hopes of boosting their engagement in the broader global economy. “The TRON team and myself are delighted that Prime Minister Roosevelt Skerrit trusts TRON to develop the blockchain infrastructure that will empower their participation in the decentralized financial future,” said Sun. “We hope it is the first of many technological partnerships with sovereign governments to come.”

Championing Dominica’s vision for their future was an exciting commitment for TRON to make. This is the first time a major public blockchain is partnering with a sovereign nation to develop its national blockchain infrastructure. As one of the major public blockchains with more than 115 million users and 4 billion transactions, TRON’s partnership with Dominica enables a number of usage scenarios and provides a strong foundation for future success.

TRON DAO is a community-governed DAO dedicated to accelerating the decentralization of the internet via blockchain technology and dApps.

Founded in September 2017 by H.E. Justin Sun, the TRON network has continued to deliver impressive achievements since MainNet launch in May 2018. July 2018 also marked the ecosystem integration of BitTorrent, a pioneer in decentralized Web3 services boasting over 100 million monthly active users. The TRON network has gained incredible traction in recent years. As of October 2022, it has over 115 million total user accounts on the blockchain, more than 4 billion total transactions, and over $13.2 billion in total value locked (TVL), as reported on TRONSCAN. In addition, TRON hosts the largest circulating supply of USD Tether (USDT) stablecoin across the globe, overtaking USDT on Ethereum since April 2021. The TRON network completed full decentralization in December 2021 and is now a community-governed DAO. Most recently, the over-collateralized decentralized stablecoin USDD was launched on the TRON blockchain, backed by the first-ever crypto reserve for the blockchain industry – TRON DAO Reserve, marking TRON’s official entry into decentralized stablecoins.